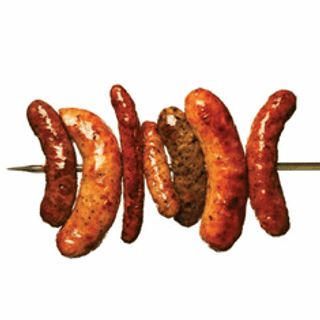 Since ancient times, people have made sausage, originally as a delectable way to preserve meat. Meat was preserved with salts and cures prior to the invention of refrigeration. New spices and improved sausage-making methods were added over time, which raised the caliber and flavor of sausage. For all kinds of meats and occasions, we now have a huge selection of delectable sausages.

Sausage is made from ground meat, which is then mixed with salts, seasonings, and spices, then stuffed into natural or synthetic casings. There are two basic kinds of sausage; fresh and cured.

Fresh sausage is made from ground meat and spices and is not cooked until just prior to serving. Fresh sausage will only keep fresh in the refrigerator for a few days, but it can be frozen for up to a year. Fresh sausage can either be stuffed into casings or formed into patties. Types of fresh sausage include breakfast sausage, Polish sausage, Italian Sausage, and bratwurst.

Cures sausage, like fresh sausage, cured sausage is also made from ground meat and spices, but cured sausage undergoes a curing process to prolong the shelf-life of the meat. For centuries, people have been curing meat by adding salts, drying meat, or fermenting meat. Today, public health practices require the use of nitrates or nitrites to make sure that dangerous microorganisms, like those that cause botulism, are destroyed.

Cured sausages are the most complicated of all sausages to make, as the curing/drying process must be carefully controlled. After the cured sausage is made, it can be eaten right away, and will keep for very long periods under refrigeration. Some cured sausages don’t even need to be refrigerated.

As the name implies, dried sausages are not cooked but rather are dried until they lose about 25% of their original weight. Examples of dried sausages include salami and pepperoni.

We Are Committed to providing you with 100% satisfaction in your experience with us! We feel that the best way to build repeat business and a long lasting relationship with our customers is by treating them right and giving them the highest quality customer service, along with unmatched product selection and competitive prices. If we ever fail to meet your expectations please contact us and we will make every attempt possible to meet and beat your highest expectations in order to make you a happy customer.